Bunch of college students pack their swimwear and head to one of their friend’s lake house for a weekend getaway. Problem - The Lake is infested with deadly sharks. Be it the acting, story, screenplay, graphics or the dialogues – everything was juvenile about the film, notwithstanding the actors themselves. Better than ‘Piranha 3DD’, but even that film isn’t a ‘benchmark’ so to speak! 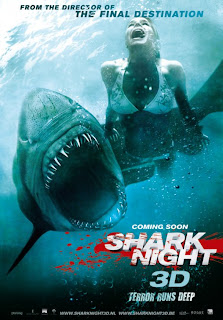 7 college friends Nick (Dustin Milligan), Dennis Crim (Chris Carmack), Beth (Katharine McPhee), Gordon (Joel David Moore), Malik (Sinqua Walls), Maya (Alyssa Diaz) and Sara Palski (Sara Paxton) head to Sara’s lake house in the Louisiana Gulf for a weekend getaway. The girls are looking forward to have a wild time, while the guys want to get laid. However, they don’t know that the lake adjoining the house is infested with deadly sharks. Malik, for instance, gets his arm ripped off while he is water skiing. The group soon realizes that there’s not one but fifteen species of sharks moving around in the lake. Malik’s girlfriend, Maya, gets killed by a shark and many such incidents follow. With their lone boat destroyed, while the group was trying to get away from the sharks, and no phone signals, will the group get out of the place alive?

This is the sensible and more realistic part of the story. The second half, of course, offers insanity in various doses. The characters are very predictable. You have the typical nerd, the lover boy, the Casanova, the desperate guy, and three gorgeous girls. Even the casting was quite clichéd, and the acting followed suit. The performances were forgettable, mildly put. The ‘stars’ of the film try too hard to emote. You would’ve still forgiven them for their performances had there not been that one ‘after-credits’ song. If you do watch the film, don’t miss this song. It appears after the credits. 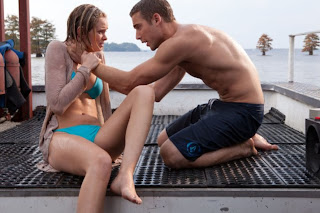 The story was just a trifle better than the other ‘deadly sea animal against ‘hip’ collegians’ sagas, but that is no consolation. There is more story, for instance, than skin-show or blood-and-gore. However, the acting department falls short miserably. Even the dialogues are lazily written. There is a big twist in the second half, but then it’s followed by even more bizarre twists. The director David R. Ellis promises a ‘watchable’ film in the first half, but leaves us shell-shocked with the inexplicable end. There’s a rap song in the end, which is 10 times more ridiculous than the rest of the film put together.

If the indications haven’t been strong enough, here it is, you’re better off staying away from the ‘Shark Night 3D’. (First Posted in MSN)