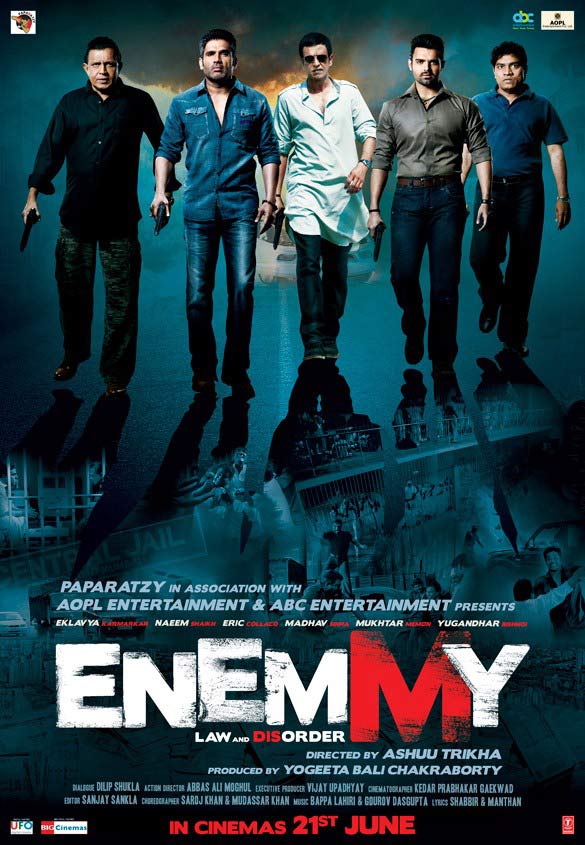 'Enemmy' is a film about four buddies (do you sense irony here?). Suniel Shetty and Kay Kay Menon play foster brothers in this crime-drama, which revolves around the police-underworld-politics nexus. Mithun Chakraborty plays a senior investigator, who is looking into a robbery case.

There are moments in the second half, when you do notice a semblance of a good script. There is a clever story hidden in the film, and it shows, albeit occasionally. However, most technical elements, such as dubbing, editing, music, screenplay among others, fail to make the cut.

An innocuous robbery takes place in broad daylight. A lot of money is involved, which should apparently reach a dreaded gang lord Mukhtar Menon (Zakir Hussain), but is stolen by four mercenaries. No one knows who the four mercenaries are!

But, the real story begins to unravel when Yugantar Sharma (Mithun Chakraborty) enters the picture, and turns the entire investigation on its head.

The way in which the equation between the police department and the criminals, has been portrayed, is quite engaging. However, the production values, the unnecessary songs, needless characters, over-the-top, gravity-defying stunts and the occasional hamming does mar the film a trifle!

Mithun Chakraborty and Kay Kay Menon have got the best dialogues and scenes, and both the seasoned actors live up to their billing. Suniel delivers a decent performance as the ‘Bhau’ of the gang.

The film fails to impress, mostly owing to poor editing and misplaced scenes. Overall, the film is a half-baked affair!

'Enemmy' is promising in some parts. However, these parts are too few, and far in between.