‘Parinda’, the Vidhu Vinod Chopra film, revolves around the gang rivalry prevalent in Bombay (now Mumbai) during the late 80s. The film reflects around two brothers, Kishen and Karan, on the opposite sides of the law with the backdrop of the Bombay underworld.

It features in the must-watch lists of most Hindi film buffs around the world. The realistic portrayal of crime, exceptional performances by Anil Kapoor, Jackie Shroff and Nana Patekar, and the magic of writer-director Vidhu Vinod Chopra and editor Renu Saluja make ‘Parinda’ one of the best gangster movies to be made in the country. 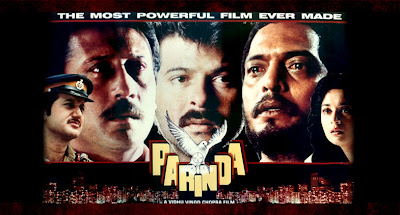 Kishen (Sameer and Jackie Shroff) and Karan (Hitesh and Anil Kapoor) are two brothers who have spent most of their childhood on the streets of Bombay, selling newspapers, doing odd jobs, getting involved in street brawls etc. They along with another sibling duo, Prakash (Jatin and Anupam Kher) and Paro (Shweta and Madhuri Dixit) eke out a living on the streets of Bombay. Troubled by poverty, Kishen joins hands with a gangster Anna Seth (Mohan and Nana Patekar). Time passes by and the lives of the four friends move in different directions. Karan goes to the United States to study, Paro becomes a school teacher in Poona (now Pune), Prakash becomes a police officer, while Kishen, while trying to fend for himself and his brother, becomes a dreaded gangster in Anna’s gang. Anna moves on from being a small-time crook to a dreaded gang lord, involved in drug deals, trafficking of women, murders as well as smuggling. Karan is unaware of the crimes that his brother has committed and upon his return from America, witnesses the murder of his good friend Prakash, plotted by Anna and his gang. Hence, Karan takes it upon himself to wage a war against the might of Anna. What follows is a series of murders, twists and turns, romantic liaisons and dramatic confrontations.

The performances, to put it mildly, are the life of the film. Anil Kapoor gives one of his career-best performances as Karan. His character goes through a myriad of emotions throughout the film. An innocent youngster returning from America, overjoyed to meet his brother, gets the shock of his life when his best friend Inspector Prakash dies in his arms. Anil’s brilliance lies in the fact that he could shift from the caring brother to a charming lover to a troubled citizen to a vengeful friend so easily. One could call his initial scenes in the film a tad over exuberant, but Anil totally makes up for it while enacting the serious bits. His chemistry with Madhuri Dixit is scintillating. Madhuri has a small role in the film. Anil and she have a handful number of scenes, a few songs (notably Tumse Milke Aisa Laga) and a very aesthetically shot lovemaking scene in the film. Dixit gives a sincere performance. Jackie Shroff, as the angst-ridden brother and the much-feared gangster Kishen, delivers a strong performance. He does go over the top at times, and yes, quite often underplays it a bit too much, but his role leaves an impact on the viewer’s mind. The supporting characters, in particular, Anupam Kher as Inspector Prakash, Suresh Oberoi as Abdul Khan, Anang Desai as Inspector Meerani, Tom Alter as Musa and Kamal Chopra as Rama, provide a perfect foil to the principal characters. Nana Patekar gives an excellent performance as the antagonist. His maverick act of Anna Seth, is so domineering that you start hating him the moment he comes on the screen. It takes really good acting to evoke such strong reactions from any viewer. 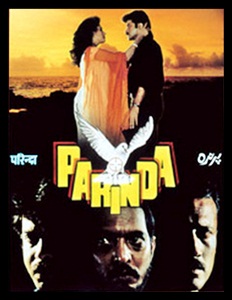 One of the things that stand out in this film is the realistic approach in its writing and its characters. The underworld has been portrayed very close to what it must have been. Film made during those times had their criminals hidden in sprawling bungalows or dingy dens surrounded by hundreds of bodyguards. ‘Parinda’ had nothing of that. Yes, it did have over-the-top scenes, but even that was a far cry from the films made during that time. The writing (Vidhu Vinod Chopra, Imtiaz Hussain and Shivkumar Subramaniam) is phenomenal. The story may/may not have been inspired but it does keep you engaged for 2 hours 45 minutes. There are a few scenes, such as the assassination of Anupam Kher’s character, the killing of Kamal Chopra’s character, the sequences following the lovemaking sequence between Anil Kapoor’s and Madhuri Dixit’s characters, which are deeply etched in your mind and remain with you long after you have watched the film.  The editing by Renu Saluja is fine. She could have snipped out a lot of needless and inconsequential scenes but then, they must have been kept to keep the film ‘commercially viable’.

The music of the film (composed by Rahul Dev Burman) is decent. Although, the songs should have been completely done away with in the first place, ‘Tumse Milke Aisa Laga’ sung by Asha Bhosle and Suresh Wadkar is well shot.

Vidhu Vinod Chopra, the director, introduced a new style of filmmaking in ‘Parinda’, which was later emulated in films such as ‘Satya’ and ‘Vaastav’. It was one of the first true-blue gangster films to be made in India. There are certain flaws in the film but the performances and the concept make up for it.

‘Parinda’ is a cult classic. Must watch! (First Posted in MSN)