There are some films which enthral you and deport you into another world, that of vivid imaginations. Even if they are made for kids, they have the ability to hold the attention of audiences of all ages, just because of the conviction their makers show in their product.

Sadly, Dharmraj Films' fantasy film Chutki Bajaa Ke possesses none of the aforementioned qualities. An orphan christened Chottu (Ishant Indaliya) wanders from place to place looking for menial chores, fighting for his survival. He gets chucked out of the house, where he was a servant, being accused of theft (falsely). He gets humiliated at a restaurant, where he is tripling up as the waiter, a help and the delivery guy. The manager of the restaurant taunts him, beats him and refuses to give him food or money. You heart goes out to the kid, but even more so to the audience who is bombarded with inane dialogues, silly scenes and an even more horrific soundtrack.

The kid faces a reversal of fortunes, when he finds a taveez (necklace), which upon wearing, can make him swap his appearance with anyone else in the vicinity, just by snapping his fingers. Thus, life changes for Chottu, who can now enjoy all the pleasures of life that he missed out on, teach his detractors a lesson, and help nab the villains in the end. 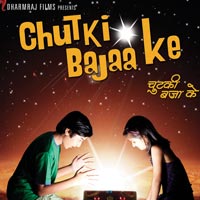 The music of the film composed by Raaj Aashoo-Rajeev Tanvi is in one simple word, abominable. If the scenes itself don't put you to sleep, the songs definitely will. They would have been better off with no music at all.

The script keeps faltering after regular intervals and there are hardly any high points in the film. The story is a very predictable one, riddled with clichés. In spite of that, there are many films that have fared well, thanks to good performances and able direction.

The makers have also incorporated a few scenes about the issue of child labour. However, even these supposedly serious sequences start seeming obnoxious, thanks to some preposterous acting by the adults in the film. Yes, you heard it right.

In this film about 'Child Labour', the adults are the biggest let-downs. The makers, the technicians, the bunch of senior actors, including an actor like Mukesh Tiwari, fail to contribute anything to this film. The child actors, Ishant in particular, do their job well. If only the director (Vedant Vishnoi) had kept away with the clichés and the shenanigans with which we used to associate the films of the 90s, Chutki Bajaa Ke would have been a good product.

The reviewer gives 1.5 stars, just for the kids! (First Posted in MSN)