Madagascar 3: Europe’s Most Wanted (2012) Review by Shivom Oza – ‘Circus Americano’ At Its Best 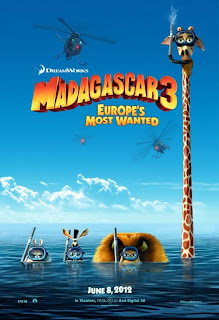 Alex (the Lion), Marty (the Zebra), Melman (the Giraffe) and Gloria (the Hippo) are back once again to enthral you in the third instalment of the ‘Madagascar’ franchise, ‘Madagascar 3: Europe’s Most Wanted’. This time, they travel across continents from Monte Carlo, Rome to London and finally to their beloved abode New York City. And following them on their trail is the hot-headed, super heroic and the conniving French policewoman (Frances McDorman) who fights tooth and nail to capture Alex.

Now, the crux of the story forms when the group of four meet up with the penguins at Rome and en route to the Central Park Zoo at New York City, they meet up with a circus troupe and deliberate their next plan of action.

The artistes giving their voice overs for the principal characters Ben Stiller, Chris Rock, David Shwimmer and Jada Pinkett Smith are first-rate, escalating upon their acts in the previous two versions.

There are certain sequences in the film that take your breath away, such as the one in which Alex tries to teach the female jaguar Gia a fabricated act christened ‘Circus Americano’. The chemistry that the two beasts exuberate, the background music (the maestro Hans Zimmer at his very best) and the stupendous animation on display make this scene one of the highlights of this crisp yet entertaining 93-minute joyride.

The circus show put on by the animals, the adrenaline-pumping speech delivered by Alex, the camaraderie amongst all of them, the adorable moments shared between Alex and Gia, as well as Sonya the Bear (Frank Welker) and King Julien (by the inimitably hilarious Sacha Baron Cohen) and the colourful circus acts performed to the music of Katy Perry’s hit ‘Firework’ is what make the film all the more inviting.

There are no lull moments in the film. The shortness of its length helps the story move at a breakneck pace, leaving audiences at the edge of their seat throughout. There’s always something or the other relevant happening. Thankfully, no fillers have been incorporated, as is the norm with animated movies. The song selection is stellar from Katy Perry’s ‘Firework’ to Yolanda Be Cool’s ‘We Speak No Americano’ to Danny Jacobs’ works topped by a brilliant sound given by the Oscar winning musician Hans Zimmer.

The animation is pristine abled by spectacular 3-D effects. The 3-D does accentuate the overall look of the film, unlike recent fare which doles out its apparent visual effects only to bring in the numbers. DreamWorks Animation has a winner at hand with this one, exhibiting picturesque locations such as Rome, Vatican City, New York and London.

To sum it up, this film is a complete jamboree and brings back delightful memories of the first and the second film. Wait till the end credits, because you cannot take ‘I Like To Move It’ out of a ‘Madagascar’ film.

Want to go on a vacation, folks? This film is your perfect weekend getaway!
The reviewer gives the film 3.5 stars. (First Posted in MSN)