Tej, a wealthy-yet-stingy businessman, buys a luxury SUV for his future son-in-law. However, on one night his notorious son, Sameer, sneaks out this prized possession and ends up losing it.

Ashima Chibber’s ‘Mere Dad Ki Maruti’ is a fun, feel-good film. The terrific dialogues, music and performances make up for the over-the-top screenplay.

Sameer (Saqib Saleem), Chandigarh’s useless bugger (or ‘burger’ as his dad, Tej (Ram Kapoor), calls him), takes out his father’s prized possession, a Maruti Ertiga, in the night to impress the college hottie, Jasleen (Rhea Chakraborty). While Sameer manages to sweep Jasleen off her feet, he ends up losing the 10-lac-rupees-worth-car. 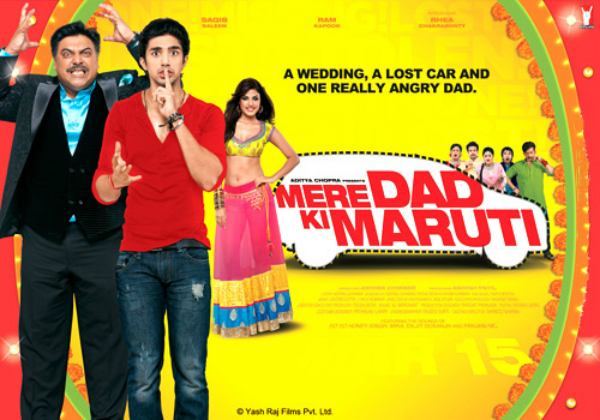 So, his friend Gattu (Prabal Panjabi) and he embark upon the car-hunt. After running helter-skelter through the streets of Chandigarh all night, the duo give up. Eventually, they cook up a plan to get another car. The cat-and-mouse begins with Sameer trying his level best to cover up this gaffe from his temperamental father. The story begins on a great note and is excellently placed till the interval point. Post, second-half, there are a few unbelievably over-the-top scenes. Yet, ‘Mere Dad Ki Maruti’ manages to culminate wonderfully.

The film’s dialogues (Ishita Moitra), interspersed with Punjabi slang, are one of the highlights of this film. The story, penned by Neeraj Udwani, is fresh, but the treatment did get a bit formulaic. There’s a scene in which Prabal’s Gattu delivers the ’70 minute’ speech a la Kabir Khan from ‘Chak De India’. There’s another scene in which a religious procession is playing ‘Dhoom Macha Le’ from ‘Dhoom’. Marriage is an integral part of the film, so there's ‘Kajra Re’ from ‘Bunty Aur Babli’ playing several times. These scenes are enjoyable, but one hopes that the production house doesn’t keep coming up with ‘YRF’ references. It does get a bit repetitive. Saqib Saleem, Prabal Panjabi and Ram Kapoor deliver outstanding performances and Rhea Chakraborty too, is quite good. The best part about the film is the foot-tapping music by Sachin Gupta. The soundtrack boasts of names such as Mika Singh, Yo Yo Honey Singh, Diljit Dosanjh, and Panjabi MC among others. ‘Main Senti Tha’ and ‘Panjabiyaan Di Battery’ are surely to get you to hit the replay button, again and again!

Comedy reigns supreme in the story and along with the wonderful music and the emotional touch towards the climactic moments, makes this film a great family entertainer. The youth, in particular, will tremendously enjoy it.