Bombay, now Mumbai, is often referred to as 'sapnon ka sheher' (city of dreams). There's a scene in 'Salaam Bombay', when Krishna, played by Shafiq Syed, is requesting for a ticket to any big city in the vicinity and the ticket seller tells him, 'Bombay jaa, waapas film star ban ke aana'. This, folks, is the magic about the city. Mira Nair’s ‘Salaam Bombay’ captures the life on the streets of this glorious city.
Nominated for the Academy Award for Best Foreign Language Film, ‘Salaam Bombay’ is a heart-rending film. The story, and particularly the mind-numbing climax, won't make you smile or cry. Instead, it will stun you! 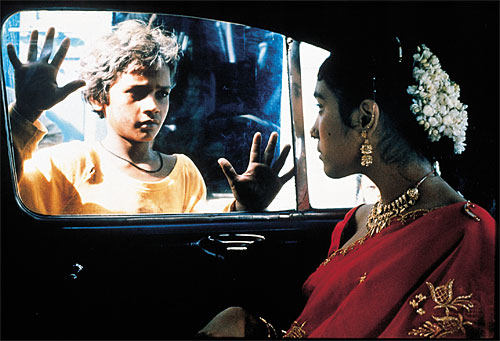 Krishna (Shafiq Syed), who has run away from his home after being involved in a scuffle with his brother, works in the circus. On one of the days, young Krishna is left abandoned by his circus troupe after being asked to run an errand. The boy finds it difficult to find his way back to his mother, or locate his circus troupe. So, he lands up at the railway station and travels to the nearest big city, Bombay. Here, he hopes to collect 500 rupees so that he can return to his 'mulk' (home).

Krishna loses the little money that he had on the first day itself, as he gets robbed by the street urchins. He follows the robbers all the way till Bombay's red-light area at Grant Road. Here, he comes across interesting characters. Baba Golub (Nana Patekar) has hired Chillum (Raghubir Yadav) to sell drugs for him, while his wife Rekha (Aneeta Kanwar) sleeps around for money with well-off men at the up-scale areas of the city.

Chillum, who is a hustler and a drug-addict, befriends Krishna and gets him a job at a tea stall. So, Krishna is rechristened as 'Chaipau'. 'Chaipau' loses his heart to a young prostitute, named 'Sola Saal' (Chanda Sharma), which colloquially translates to Sweet Sixteen. While Baba and Rekha share a complicated, sometimes abusive, relationship with each other, their daughter Manju (Hansa Vithal) finds herself neglected all the time by her parents and her friend, Krishna/Chaipau.  Meanwhile, the young boy finds himself in the middle of several complicated equations; the unspoken one with Sola Saal, the helpless one with the self-destructive Chillum and lastly, dealing with his own troubles of trying to procure 500 rupees, which will help him go back to his 'mulk'.

'Salaam Bombay' captures the raw, relentless energy on the streets and slums of Bombay city. Although the film largely is about the downtrodden and the underprivileged class, every one, irrespective of their cast, class, race, sex, region or faith, will relate to these characters. The pathos of the city is wonderfully captured through Sandi Sissel's camera. Even the editing, which does seem abrupt on a few occasions, by Barry Alexander Brown brilliantly sets up the premise of the film. The cast, comprising of stellar actors in Patekar, Kanwar, Yadav, Shafiq and Vithal, make these dingy-characters their own through their exemplary performances. The cameo list includes Irrfan Khan, Sanjana Kapoor and Anjan Srivastav, all of whom went on to carve their own special place in the annals of the Indian entertainment industry. Mira Nair and Sooni Taraporevala's 'Salaam Bombay' is arguably the best film to be made on Bombay/Mumbai. While it does not mirror every aspect of this wonderful city, the parts that it does are immortalised in the best possible manner. One dialogue in this film really hits you hard - one elderly man tells Krishna/Chaipau - 'Ek din, apne Hindustaan mein sab theek ho jaayega', which translates to 'One day, in our India, everything will be alright'. This one line speaks volumes about the poignancy within the film. Hriday Lani's dialogues play an equal role in making this film the 'cult' that it is.

We keep reading about how the people of Mumbai resume their normal lives post any catastrophe - deluges, bomb blasts, riots, terror attacks. This phrase, 'the indomitable spirit of the people of Mumbai' is used by each and every scribe, every time our city faces a calamity. You know what best describes the indomitable spirit of Mumbai? 'Salaam Bombay'! Thousand Salaams, Mira Ji!