A film that was made in the year 2002 unfortunately fails to appeal, in any way. With a clichéd storyline, stereotypical characters and lifeless music, ‘3 Bachelors’ is quite a ‘dud’. Even Sharman Joshi’s presence fails to lift the film, in any way. 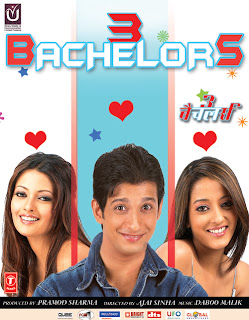 The story is about two bachelors, Amit (Sharman Joshi) and Jai (Manish Nagpal), who have just moved into Mumbai to study at a reputed college. However, fate hits them hard on the very first day. Not only do the boys get ragged on the first day, but also fail to acquire any accommodation. Only one landlady is willing to give a house, given that the tenants are a married couple. Jai bites the dust and goes for a makeover (a la Kamal Haasan in ‘Chachi 420’) and becomes Jaya, Amit’s wife. Incidentally, the landlady, Shalini Devi (Himani Shivpuri), is also the principal of the college that the two boys study in. Shalini Devi’s nieces Neha (Raima Sen) and Nisha (Riya Sen) fall for the two boys. There is another angle. A professor Deepak Varma (Manoj Pahwa), who is supposedly a widower (suggested, not told), is looking for a promotion at the college. In lieu of that, he tries to woo the college principal. Yes, the story is quite messed up. A lot of misunderstandings, a couple of songs, endless revelations and heartbreaks later, this ‘dated’ film reaches its predictable climax.

The two leading men Sharman Joshi and Manish Nagpal strike up brilliant chemistry. Both have great comic timing, and the duo manage to lighten up the proceedings whenever they appear on the screen. However, the film itself is so dated (it went on floors a decade back) that even the supposedly ‘good’ scenes fail to create an impact. The writing is to blame for this, which unfortunately, ends up spoiling the entire movie-watching experience (Irrespective of the performances). Seasoned actors such as Manoj Pahwa and Himani Shivpuri too, deliver fine performances, but are let down by the lacklustre writing. There are a couple of cameos in the film, Mika Singh crooning ‘Something Something’ and Nigar Khan in an item number. However, the film has already become too yawn-inducing to elicit any interest from the viewer, thereon. Raima Sen and Riya Sen are major disappointments. Since, their voices have been dubbed, albeit miserably, won’t say much about their dialogue delivery, but the acting itself is appalling.
As already mentioned, the writing is horrible. The writers (Raghuvir Shekhawat and Ajai Sinha) come up with out-dated jokes, clichéd dialogues and an uninspiring storyline. The makers too, should take the blame for this debacle.

The editing (Sanjay Sankla) is average. When the film itself is bad, there is nothing much that the editor can do. The direction by Ajai Sinha is just about average. Can’t keep giving the timing as an excuse! There were good films made, a decade back as well. Daboo Malik shells out forgettable numbers.
Had this film been released in 2002, it would have found quite a few takers. Such films used to work at that point of time (single-screen theatres were more in demand, back then). The producers should have released the film directly on television (keeping the financial constraints in mind), instead of giving it a proper release.

The film cannot be watched, at one stretch. Maybe, if it does come on television, you may catch it to see the pre-‘Ferrari Ki Sawaari’ Sharman Joshi. However, not a single paisa should be spent on ‘3 Bachelors’. (First Posted in MSN)