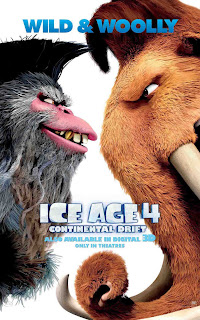 The mammoth Manny (voiced by Ray Romano), Sid the sloth (voiced by John Leguizamo) and Diego (voiced by Denis Leary), the smilodon or the saber-toothed cat, are back with the fourth film in the ‘Ice Age’ franchise. In a parallel storyline, you have Scrat (voiced by Chris Wedge), the saber-toothed squirrel, on the hunt for acorns. Scrat triggers the break-out of the Pangaea into the continents that we know of today’s time.

Meanwhile, Manny and his wife Ellie (voiced by Queen Latifah) are dealing with their teenage daughter Peaches (voiced by Keke Palmer), who is smitten by Ethan (Aubrey Graham), a teenage woolly mammoth. Peaches, is upset with her father for being so restrictive when it comes to her and yearns for independence. Keeping Peaches’ company is the soft-spoken and the inimitably charming molehog, Louis (voiced by Josh Ged), who secretly has a crush on her. Sid has been left with his Granny (Wanda Sykes), who also gets abandoned by their family. Now amidst all this drama, the break-up of the continent starts having its repercussions as Manny gets separated from his family. Accompanied by Sid, Diego and Granny on a floating ice raft, Manny thinks of ways to reunite with his family.

The route way back to his home kept getting tumultuous as the quad got captured by a pirate gang, led by Captain Gutt (voiced by Peter Dinklage), a Gigantopithecus. Manny rejects Gutt’s offer of joining the pirate gang and ends up infuriating him. Diego falls for the female pirate Shira (voiced by Jennifer Lopez), also a saber-toothed cat, who helps the quad escape for a brief period.
Manny, Sid, Granny and Diego encounter sirens, shown as sharp-toothed creatures, which take the shape of loved ones, and attempt to entice the sailors.

How the quad brave all odds (in the form of storms, a paralyzed Sid, another attack by Captain Gutt, attempted attack by Sirens) in order to get everything back to normal forms the crux of the story.

The plot was myriad in the first-half. It is in the second-half of this 90-minute film that the story finally begins to develop. It takes too long, for the battle lines to be drawn; hence time gets spent in watching endless gags, tomfoolery and the occasional tussle on screen. There are a few endearing moments in the film such as the romantic track between Diego and Shira, Peaches trying to impress Ethan, Louis’ waging a fight against the mighty Captain Gutt to save his love Peaches. However, they are too few and far in between, and sadly the only uplifting moments in the film.

The animation was stupendous. Blue Sky Studios deserve a pat on their back for the brilliant visual effects. However, the script leaves a lot to be desired. The animation is on par with recent films such as ‘Madagascar 3: Europe’s Most Wanted’ and ‘Brave’, but it is not as much about the visuals as it is about the entire film. The 3D is passable. 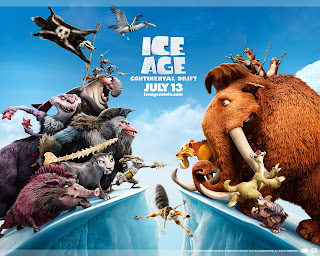 The line-up consists of heavyweights such as Jennifer Lopez, Queen Latifah, Ray Romano, John Leguizamo, with two celebs of Indian origin as well, Aziz Ansari and Kunal Nayyar (of ‘The Big Bang Theory’ fame). Voiceovers were exceptional but they too, were let-down by some lazy dialogue writing. The soundtrack by John Powell was good with the final track of the film ‘We Are’ (written by Ester Dean) evoking much excitement from the audience.

The writing (Michael Berg and Jason Fuchs) and the direction (Steve Martino and Mike Thurmeier) could have been a lot better. The franchise, which has been exceptional thus far, does disappoint this time around.

There is nothing noteworthy about the story. It’s a 45-minute concept dragged to an hour and a half. Some of the sequences and gags playing out in the film are needless. However, it is essentially a children’s film and the kids will love it! (First Posted in MSN)