'Trishul' is a film, about how a war waged by a son against his illegitimate father, turns into a business rivalry and a bitter family drama. 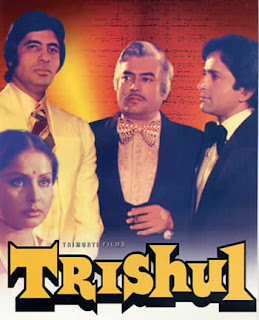 Vijay Kumar (Amitabh Bachchan) is the illegitimate son of a rich construction tycoon Raj Kumar Gupta (Sanjeev Kumar) and his lover Shanti (Waheeda Rehman) whom he gives up to marry a wealthy heiress. Raj, who starts out as an engineer in a construction company, ends up as R K Gupta, its owner, after the marriage. Raj is not aware of his son, who is looked after by his mother all along and after her death, comes to Delhi to take revenge on the Gupta family. R K Gupta’s son Shekhar (Shashi Kapoor) and daughter Babli (Poonam Dhillon) have grown up to become independent individuals and get influenced by Vijay to revolt against their father. What follows is a tale of one-upmanship, lies, deceit, hatred, rebellion and eventual redemption.

Sanjeev Kumar effortlessly plays the tied-down son, helpless lover, workaholic businessman and the irresponsible father. Although his role could have been more substantial, he does give it his everything. He may not be the archetypical leading hero in the film, but the story revolves around his rivalry with Amitabh Bachchan’s character and the actor lives up to his reputation. Waheeda Rehman, who plays Sanjeev Kumar’s lover and Amitabh Bachchan’s mother, Shanti, has a very short role in the film. She plays the demure girl brilliantly and does well in the portions where she struggles to make ends meet in order to bring up her son. Shashi Kapoor is at his effervescent best, playing the sprightly, rich, flirtatious yet a sincere young man. He brings a lot of life to this essentially dramatic film. Amitabh Bachchan puts in one of his career-best performances in this film. Be it in the dramatic conversational scenes, the romantic ones, the emotional sequences or the action stunts, Bachchan excels and how! The scene where Amitabh Bachchan (Vijay Kumar) meets Sanjeev Kumar (R.K.Gupta) for the first time is excellently written and impeccably performed by the two geniuses. Hema Malini, besides looking stunning, does fine in her limited role of a rich businessman’s daughter. The chemistry between Shashi Kapoor and Hema Malini is absolutely electrifying. Rakhee Gulzar is fine as Geeta. Her role, especially her chemistry with Amitabh Bachchan, could have been explored further though. One wonders why Yash Chopra asked her to mouth certain lines in the English language, when she couldn’t get the diction right. A few lines hardly make a difference, but it does put the viewer off.  A young Sachin Pilgaonkar sparkles in a supporting role, where he is cast opposite the lovely Poonam Dhillon. Once again a Yash Chopra film has women playing independent and strong characters. It was interesting to see women play modern characters, and not the stereotypical ones where they’re shown submissive. Prem Chopra as the evil Balwant Rai is at his villainous best and gives us yet another memorable performance.

Firstly, the writing (Salim Khan and Javed Akhtar) is brilliant. The writers infuse the perfect combination of romance, drama, action and suspense in the film. The dialogues too, are not filmy per se. For some reason, the story and the dialogues of the film seem very real. The screenplay was found wanting at various junctures in the film.

The editing (B. Mangeshkar) is good for most of the duration of the film. There are a few misplaced shots with improper angles but you can put it down to the lack of technology (as it is, such discrepancies were prevalent in most films made during that time). Another noteworthy scene in the film is the one where Amitabh beats up the bad guy Madhav Singh illegally taking over R K Gupta’s land. The fight sequence (impeccable directed by Shetty) was hard-hitting and had a few light moments too, towards the end, guaranteeing wholesome entertainment.

The songs could have been shot better. The choreography falls flat at times and fails to infuse the kind of energy that is associated with Yash Chopra films. The music by Khayyam is superb. However, none of the songs have lasted the test of time. The numbers are hummable, but only while you watch the film. They aren’t memorable. ‘Mohabbat Bade Kaam Ki Cheez Hai’ was the best song in the film.

Coming to the direction, Yash Chopra once again extracts near-flawless performances from his cast. The film must have been a risqué one, during the time that it was made in, but Chopra brings his own edge to the table. The romantic sequences, especially, have been brilliant conceived and shot. The action sequences in the climax of the film do end up looking comical; however, they do nothing to spoil the charm of the film.

Not just does it boast of an interesting story, but also riveting dialogues and flawless performances by the cast, notably Sanjeev Kumar, Amitabh Bachchan and Shashi Kapoor. Thought the film may not be the most perfect, technically, it does entertain you for a good 2 hour 45 minutes. A story well told, and way ahead of its time. (First Posted In MSN)