Dredd 3D (2012) Review by Shivom Oza – Brilliant Visuals, Action-Packed and nothing much else!

A drug lord ‘Ma-Ma’ wreaks havoc at the 200-storey slum located at the dystopian metropolis Mega-City One. It is up to Judge Dredd and the Trainee Anderson to bring the perpetrators to justice.

Visually, the film is marvellous. Action-packed to the hilt! Had it been a tad longer, would have been unwatchable. 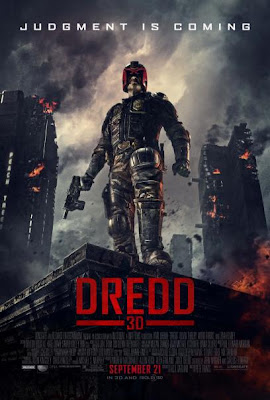 Based on the ‘Judge Dredd’ comics, the Pete Travis-directed film ‘Dredd 3D’ is a British-South African production venture. It revolves around Judge Dredd (Karl Urban), who has been given the “power of judge, jury and executioner at Mega-City One, a vast metropolis located within a post-apocalyptic wasteland”. Accompanying him is a trainee Anderson (Olivia Thirlby) as both try to bring order to the 200-storey slum guarded by Peach Trees; drug lord Madeline Madrigal, known as Ma-Ma (Lena Headey). Ma-Ma injects ‘Slo-Mo’ (an addictive new drug that slows the user's perception of time to 1% of normal) into three men and throws them from the top of the tower. Dredd and Anderson take it upon themselves to end Ma-Ma’s menace. Ma-Ma’s henchmen seize the tower’s security control room and block the entire building using its blast shields giving an excuse of a security test. This is done to prevent the Judges from escaping the tower.

We don’t get to see Karl Urban at all as he is masked throughout the film. However, his robotic demeanour, deadpan dialogue delivery, relatively frail physique and flatly delivered ‘one-liners’ fail to create any sort of impact. Olivia Thirlby is just about average as Trainee Anderson. Her character is basically that of a psychic so for most of the film, she is getting premonitions about a dreadful past or an impending danger. Some of the scenes that she shares with Kay (Wood Harris), one of Ma-Ma’s henchmen, are quite intriguing though. Lena Headey, who plays the antagonist, could have done much more with her character. Sadly, in trying too hard to look like a drug lord, the performance faltered. Overall, there was nothing noteworthy about the cast. 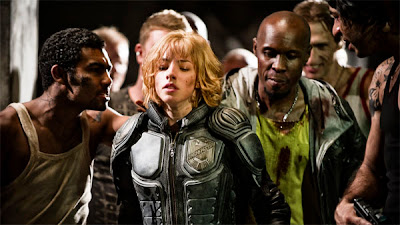 The cinematography is exquisite. If you do end up going for the film, watch the brilliant slow-motion sequences unfold on screen in 3D. It gets to your nerves, undoubtedly, but looks great nevertheless. The 3D effects too, are better than most of the recent fare that has been churned out from the foreign films this year. The action sequences have been shot very well. Writer Alex Garland wrote the script in 2006 and by the end of the film, you do hope that it had gotten made around the same time. It’s 2012 and we’ve seen better movies. Director Pete Travis has pulled off the action sequences and the scenes involving the use of the drug ‘Slo-Mo’, brilliantly. You’d wish there were more humane moments in the film. To their credit, the film is short so if you do want to enjoy a good 90 minutes of non-stop action, ‘Dredd 3D’ is it.
Not as 'fun' as The Expendables 2, but if you dig action films, go watch! (First Posted in MSN)