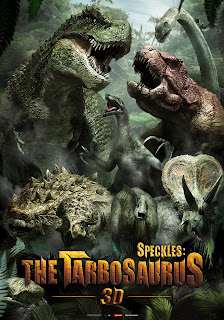 ‘Tarbosaurus’, the film, revolves around the rivalry between two types of dinosaurs, Tarbosaurus and Tyrannosaurus. The story is about the coming-of-age of the young Tarbosaurus, Spot, who is exploring the perfect paradise, but the horrific Tyrannosaurus, One-eye, comes in his way all the time.

There are so many reasons why you shouldn’t watch the film – clichéd plot, annoying voiceover, amateurish CGI and a mundane screenplay.

Millions of years ago, when the world was inhabited by dinosaurs, rivalry between Tarbosaurus and Tyrannosaurus was quite the norm. Spot/Speckles, the youngest of the Tarbosaurus family, witnesses the cunning One-eye, the vociferous Tyrannosaurus, kill all of his family members. One-eye wreaks havoc all over the Kingdom annihilating one dinosaur after the other. Spot/Speckles, meanwhile, is slowly growing up, preparing to avenge the death of his family. Spot has a one-off duel with One-eye, where he manages he overpower him. He then meets Blue-eyes, a female Tarbosaur, and both of them hunt for food together. Both of them are leading comfortable lives along with their children, until One-eye returns.

This story will test your IQ, undoubtedly. In addition, there are lines like ‘Isn’t it exciting?’, ‘Isn’t it fascinating?’ which do nothing but rub salt in your wounds. The writing of the film is abysmal. Be it the dialogues, the story or even the opening scene, the monologue at the end, the characterization, everything is just too amateurish. The CGI is decent in some parts, but most of it is just a cut back to the 90s. The film does not manage to hold your attention.

Writer-director Han Sang-Ho’s attempts to make a fine ‘dinosaur-themed’ movie for kids do fall short. The kids may enjoy it in parts, but the film is such a drag that it will even put the toddlers to sleep.

An absolute must-not watch. The voiceover is so annoying that it won’t even let you sleep in the theatre. (First Posted in MSN)