‘Maqbool’ is Vishal Bhardwaj’s Mumbai-based adaptation of William Shakespeare’s ‘Macbeth’. Set in the Mumbai underworld, the film revolves around Maqbool (Macbeth), the right-hand man of Jahangir Khan aka Abba Ji (King Duncan), a powerful underworld don. The story is about his loyalty, deceit and the eventual betrayal towards his master.

As an adaptation, the film cuts out as a terrific interpretation of Shakespeare’s works. Terrific acting, spellbinding background music and fine dialogue writing, make ‘Maqbool’ a must-watch. This film announces Vishal Bhardwaj’s arrival. The director followed this attempt with path-breaking films such as ‘Omkara’, ‘The Blue Umbrella’ and ‘Kaminey’. 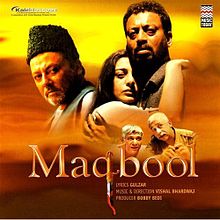 Jahangir Khan/Abba Ji (Pankaj Kapoor) is an aging gang lord, living with his mistress Nimmi (Tabu). Jahangir’s trusted accomplices are Kaka (Piyush Mishra) and Maqbool (Irrfan Khan). Both of them are extremely loyal to their master. Kaka’s son Guddu (Ajay Gehi), also a member of the gang, is in love with Abba Ji’s daughter, Sameera (Masumeh Makhija). Their marriage will make Guddu the next-in-line to become the leader of the gang. While Maqbool never pays any attention to this eventuality, Nimmi, who secretly loves him, incites him to wage war against Abba Ji and usurp his position.

2 police-offers, Pandit and Purohit (Om Puri and Naseeruddin Shah), keep appearing in between to maintain the ‘shakti ka santulan’. The two conniving cops keep swinging sides so as to witness a fascinating tale unfolding.

The film comprises acting powerhouses, each one of them outshining the other. Pankaj Kapoor delivers an almost Don Vito Corleone-type performance with his ‘Abba Ji’ act. The immense control in his voice, the menacing look on his face and the haunting background music, adds to the dramatic element in his character. Tabu spellbinds with her effervescent act in the first half and that of the victimized in the second half. Irrfan Khan delivers an astounding performance as ‘Maqbool’ and pulls off such a layered character with ease and élan. 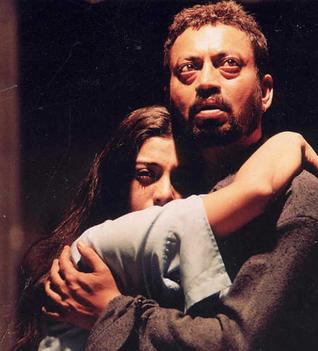 The film, despite being made on a relatively low budget in comparison to Bhardwaj’s recent films, manages to lap up the best of everything. Apart from the terrific line-up of actors, the film also excels in the cinematography (Hemant Chaturvedi) and Art Direction (Jayant Deshmukh). The sequences and the locations wonderfully capture the sombre mood, inherent within the film. The costume designing (Payal Saluja) deserves special mention. Immaculate attention is paid to the look of the characters. Irrfan’s character undergoes a drastic change in the film, which is well showcased by his look and costumes. The music also plays a wonderful role in establishing and augmenting the impact of plot points, character transformations, and critical moments in the film. The sequence wherein Nimmi and Maqbool finally succumb to their passions is excellently shown through shadowy visuals. The film has taken a fair bit of inspiration from Shakespeare and Francis Ford Coppola’s ‘The Godfather’ in equal measure. Silence has been used wonderfully in the screenplay. The editing too, works wonders for the film. The length, at just over 2 hours, gives us an immensely engaging film.

The real ‘hero’ of the film is the writing. In the music department, Gulzar gives beautiful words to Bhardwaj’s creations. For the dialogues (don’t miss Naseeruddin Shah and Om Puri’s wonderful camaraderie), Bhardwaj alone deserves all the accolades. Finally, the taut screenplay, which is the combined effort of Bhardwaj and Abbas Tyrewala, which must surely be one of the best interpretations of ‘Macbeth’ of all-time.

‘Maqbool’ heralds the beginning of so many promising careers. We get to witness the powerhouse performers of the Hindi film industry at their very best. The film, also responsible for giving Vishal Bhardwaj’s his deserved prominence, could not justify its brilliance with its box-office results. However, over the years, it has achieved the much-coveted ‘cult’ status. ‘Maqbool’ is a must-watch for many reasons. You’ll know them when you watch it.