Step Up Revolution (2012) Review by Shivom Oza – Must Watch For The Dance Aficionados!

The fourth film in the ‘Step Up’ franchise is quite different from the previous films. Firstly, there is no competition among two rival dance groups (thankfully). Secondly, the film balances the dances and the story equally, which is a welcome change from the third film ‘Step Up 3D’. Most importantly, this film did not focus on one particular dance form. It kind of, was an amalgamation of many dance forms which ends up looking magnificent on the screen. Lastly, there is a bit of social message embedded in the film. 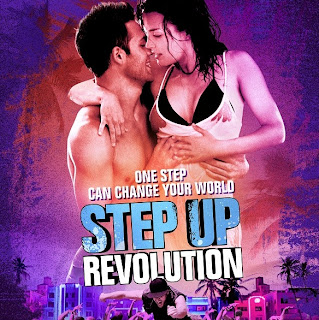 The film, overall, is a very good one. Far cry from the recently released ‘StreetDance 2’, the film boasts of breathtaking choreography, exceptional performances and some very interesting concepts in terms of the setting. Needless 3D, as always, but the film in itself is visually appealing. Dance aficionados should definitely go for it. As for the others, it’s an enjoyable 1 hour 30-odd minute ride. Go for it!

Emily Anderson (Kathryn McCormick), the daughter of a business tycoon, Bill Anderson (Peter Gallagher), arrives in Miami to fulfill her dream of becoming a professional dancer. She falls in love with Sean (Ryan Guzman), who along with being a waiter at one of Bill Anderson’s hotel, also leads a dance crew in setting up unique and grand flash mobs. His crew, the MOB, which he co-founded with Eddie (Misha Gabriel), wants to win a contest on YouTube, for which they have to notch up 10 million hits for their uploaded video.

This aspect is what was most interesting about the film. So far, most dance films have focused on a ‘David v/s Goliath’ kind of battle between an underdog dance crew and the ‘intimidating’ defending champions of a dance competition. However, ‘Step Up Revolution’ is indeed more about revolution than competition. The story is as predictable as the previous films. You know the underdogs are going to win the day in the end. However, at least this film tries to do it differently.

Now, Bill Anderson wants to destroy the MOB’s neighborhood, which forms a large chunk of Miami’s working class, and build a large hotel. In order to fight for what is right, the MOB joined by Bill’s daughter Emily take it upon themselves to fight for the people of Miami and the flash mobs soon turn into orchestrated and choreographed protestations. Their dance imbibes a revolutionary fervor and soon, all of these goalless dancers, have a cause to fight for.

However, besides Sean, no one else in the crew is aware of Emily’s family background. Hell breaks loose once they do get to know that they have amongst them the daughter of their nemesis. 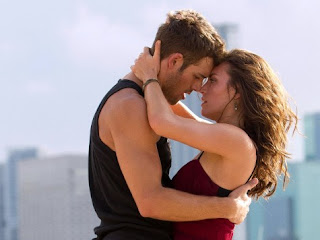 The performances (dance as well as acting) are phenomenal. This film was on par with ‘Step Up’ and ‘Step Up 2: The Streets’, in terms of the story, the concept and the execution. Kathryn McCormick looks ravishing throughout the film. Her dances were brilliant, and so was her acting but her screen presence is astounding. A participant of ‘So You Think You Can Dance’, this is Kathryn’s first film as the protagonist. You will hear a lot more of her in the years to come. The leading man, Ryan Guzman, is also quite good. His character did not have a lot of depth, or maybe the actor couldn’t pull off the dramatic bit well. However, his dance was amazing, and in such a film, the acting prowess could be neglected a trifle.  The supporting role of Eddie played by Misha Gabriel was more impactful. There are cameos by Mia Michaels, Mari Koda, and the charming Robert ‘Moose’ Alexander III, Adam Sevani. The dance performances are exceptional. Every flash mob is based on a unique concept. For instance, there’s a flash mob in the film, which is bang in the middle of an ‘elitist’ art exhibition, another at a dining room and one, even, at the lobby of a hotel. A lot of thinking seems to have gone in the choreography of these dance pieces. All of them looked absolutely stunning on the big screen. Even the choice of the music was more diverse this time around, and was not confined to one particular genre. The 3D is a bit of a dampener but then, these are the times we live in. If possible, catch the film in 2D.

The music by Aaron Zigman was brilliant backed with beautiful cinematography by Karsten Gopinath. The director, Scott Speer, does well to move away from the predictable ‘dance film’ routine and try something different.
The film ‘Step Up Revolution’ is not really a revolutionary dance-based film but it certainly is a small step forward in the right direction. If you’re remotely into dance, go watch this film. (First Posted in MSN)