‘Jaane Bhi Do Yaaro’ is a cult film about two photographers who get caught in a murder mystery, thanks to a conniving newspaper editor. A tale of lies, corruption, deceit and hope, told in a most-entertaining manner.

Two photographers Vinod Chopra (Naseeeruddin Shah) and Sudhir Mishra (Ravi Baswani) try everything possible to get that one elusive customer at their newly-opened photo studio at Haji Ali. However, fate has other plans for them as they are hired by a shrewd newspaper editor Shobha Sen (Bhakti Barve) of the ‘Khabardar’ newspaper to spy on a corrupt builder Tarneja (Pankaj Kapur) and his dealings with another crooked man, Municipal Commissioner D’Mello (Satish Shah). There is another builder Ahuja (Om Puri) who also approaches D’Mello with bribe to sanction his project. What follows is a series of bribes, threats and a cold-blooded murder! The struggles that Vinod and Sudhir go through to dodge attempted attacks, bribe offers, handling a corpse and much more is what forms the crux of this cult classic. 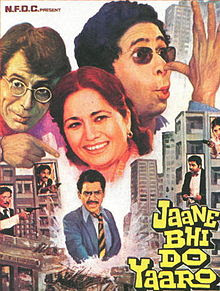 Naseeruddin Shah and Ravi Baswani are exemplary as the troubled commoners, who get trampled on their way towards a decent livelihood, by ‘elites’ such as editors, builders, policemen etc. There are so many shades to their characters – be it playing the gullible businessmen, sleazy photographers, emotional fools, tragedy-struck commoners or just hopeful citizens of this country, the actors deliver top notch performances. The supporting cast, comprising stellar actors (many of whom were unknown commodities way back in 1983) such as Pankaj Kapur, Satish Shah, Om Puri, Satish Kaushik, Neena Gupta and Deepak Qazir excel in their roles, making audiences laugh as well as scorn at their roles! Pankaj Kapur and Om Puri play roles that are contrasting in nature yet similar in traits. Satish Shah plays the Catholic Municipal Commissioner getting everything right, from the costume to the dialogues. Satish Kaushik and Neena Gupta immaculately play the builder’s sidekicks, plotting some incongruous act or the other. However, the scene stealer is the inimitable Bhakti Barve, who plays the astute, cigar-smoking, modern, cunning, dominating and the irrepressible newspaper editor Shobha Sen. She does many things in the film – fixes printing machines, smokes cigars, kicks men, reprimands builders, threatens bigwigs and seduces men into doing favors for her. The cast shines in all the scenes of the film, and the best part is that here; the cast has not let their characters overshadow the story of the entire film. There are plenty of iconic scenes in the film that have stood the test of time and are still so funny and relevant even after almost 3 decades since its release.

When masters are at work, the audiences merely applaud. Directed by Kundan Shah, edited Renu Seluja, dialogues penned by Ranjit Barot and Satish Kaushik and the story by Shah along with Sudhir Mishra and production controller being the future bigwig Vidhu Vinod Chopra, this film comprised legends in the making. Made on a shoestring budget (7 lakhs rupees), the making must not have been as light-hearted as the film turned out to be, but a cult it did turn out to be. Kundan must have had a tough time extracting such performances out of his cast despite the unflattering financial conditions. The scenes have been precisely compiled, with not a single low point in this concisely trimmed 2 hour 10 minute film. The dialogues are excellently written, capturing the pathos and the irony of the issue at hand and providing much-needed comic relief at the same time. There are memorable scenes galore in this film, the sulking of the protagonists tired by the corruption-riddled-bureaucracy below the poorly-built flyover, bribes being given through the perspective of shadows, the murder discovery scene at the cleverly titled ‘Antonioni Park’ (inspired by the 1966 film ‘Blow-up’, hence a tribute to the director Michelangelo Antonioni) and the unforgettable scene lifted from the Mahabharata, which lifts this film to another level altogether.  There are instances of profound irony in the film, which would put the most intellectual works of contemporary times in their place. The subtle comparisons between the builders and the slums, the finer differences between right and wrong have been artistically shot by the first-rate cinematographer Binod Pradhan. There is no moment in the film that will put you off. The most startling fact about the film is that all the issues discussed are so relevant even in today’s times. The agony of the Indian common man is often represented through the song ‘Hum Honge Kamyaab’. You watch a dramatic scene play out and wonder if 'anything has changed’.

Kundan Shah has done Indian cinema a huge favour by making this film. We can return the favour by watching it!

Entertaining, profound, striking, hilarious, thoughtful, chaotic, somber, mundane, eccentric, this film is all of this and more! A MUST WATCH! 4 Stars! (First Posted in MSN)