‘Rock of Ages’ is a story of two aspiring singers and two club owners chasing their dreams in the glitzy city of Los Angeles circa 1987.  How their lives adulterated by the ‘rock n roll’ lifestyle at Hollywood, reach their nadir and faces an upsurge owing to the presence of an eccentric rocker, forms the crux of the film.

An adaptation of the successful Broadway musical, the film revolves around the lives of two aspiring singers Drew (Diego Boneta) and Sherrie (Julianne Hough) dreaming of becoming famous rock stars and slug it out as helps in one of the most popular clubs of Los Angeles, The Bourbon on the Sunset Strip. The owner Dennis Dupree (Alec Baldwin) and his partner Lonny (Russell Brand) slug it out to save the club from being destroyed by the mayor Mike Whitmore (Bryan Cranston) and his trophy wife doubling up as a social activist, Patricia (Catherine Zeta Jones). The duo at the club scores a gig with the legendary Stacee Jaxx (Tom Cruise). How all of their lives entwine and as a result undergo unprecedented changes, forms the crux of this 2 hour 20 minute musical extravaganza. 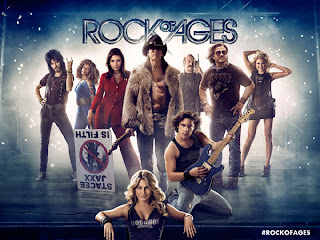 The film boasts of an impressive line-up. Diego Boneta charms in his role of a bartender growing up the ranks to be a rock star. Opposite him is the 20-something girl from Oklahoma, played by Julianne Hough, who ends up at a stripper club instead of being an aspiring singer. The actress shows flashes of brilliance in this challenging role, lip-syncing, romancing and emoting impeccably. Russell Brand is at his comical best and his chemistry with the old-timer Alec Baldwin is a treat for movie-goers. However, the best performance in this film belongs to Tom Cruise. His decadent rock god act deserves praise, not just for its brilliance, but the audaciousness as well. Clearly, this role was an unknown territory for the actor (incidentally, he was already a big movie star in the 1980s with films like ‘Risky Business’, ‘Top Gun’, ‘Rain Man’ and ‘Born On The Fourth Of July’ in his repertoire). He shines as the eccentric, over-the-top and at times impulsive rock singer whose life is embellished by sex and rock n roll (surprisingly, there is no mention or presence of drugs in the film). His look (heavily inspired by Axl Rose) was meant to be theatrical and Cruise looks the part in the film.

The film is an adaptation of the 2006 Chris D’Arienzo Broadway musical of the same name. The screenplay is penned by Justin Theroux, Chris D'Arienzo and Allan Loeb and the story does move along nicely. There are hardly any lull points in the relatively long film (2 hours 20 minutes). Although it is majorly a musical, there are several conversational scenes tailored within the script, hence lending the film a dramatized feel.  The cinematography (Bojan Bazelli) is unique in the sense that the concert scenes are not in-your-face. They have been shot with subtlety, hence making them different from the run-of-the-mill music-based films. Editing (Emma E. Hickox) too, is crisp bringing a lot of fervour to the celebratory film.
With such a stellar cast at his disposal, director Adam Shankman of ‘Hairspray’ fame did have it a bit easy. Having already dabbled in a few musicals, helming this film must’ve been quite easy for Shankman.

Obviously, being a former dancer and choreographer helps too. The director has paid equal attention to all the principal characters in the film and no ‘extra’ mileage is given to the ‘bigger’ stars such as Cruise, Baldwin and Catherine Zeta Jones. The film, in a sense, celebrates the rebellious culture grown on ‘rock n roll’ in the 1980s and Adam executes that to perfection.

The line-up of artistes whose work was incorporated in the film comprised Bon Jovi, Guns N' Roses, Def Leppard, Foreigner, Journey, Poison, Europe, Night Ranger, Twisted Sister, and REO Speedwagon. Although, the selection of a few tracks could be deliberated upon, the overall soundtrack is impressive.

You have Tom Cruise crooning a ‘Paradise City’, ‘Wanted Dead or Alive’, ‘Pour Some Sugar on Me’ while Russell Brand and Alec Baldwin sing ‘Can’t Fight This Feeling’. Diego Boneta and Julianne Hough too, shine in their part pop-part rock numbers. As far as the novelty factor goes, the film does manage to score brownie points in the music department. Overall, it must be said the music did live up to the billing.

The film may not work for the archetypical rock-music aficionados. This is not a ‘This Is Spinal Tap’ nor is it a ‘My Fair Lady’ or ‘The Sound Of Music’. It is purely meant to entertain the moviegoers. This film does enliven the era of the 80s, in a new package, featuring the stars of today. The nostalgia of the 1980s reigns supreme, as the cast delivers emphatic performances to the tunes of  Bon Jovi, Guns N' Roses, Def Leppard, Foreigner, Journey, Poison, Europe, Night Ranger, Twisted Sister, and REO Speedwagon, top lining the inimitable Tom Cruise in a never-seen-before role.