Anhey Ghorhey Da Daan (2012) Review by Shivom Oza – That Is India Too! 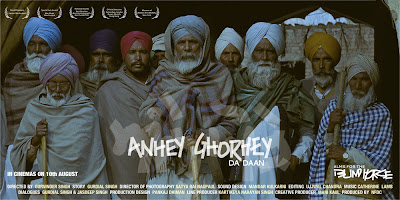 Watching the film without having an idea about its theme and message would not serve the purpose. ‘Anhey Ghorhey Da Daan’ (Alms for a Blind Horse) is a Punjabi film (subtitled in English), based on a Jnanpeeth-award-winning novel of the same name by Gurdial Singh. The film “tries to bring to screen the effect that years of subordination can bring to struggling masses in the face of events spinning beyond their control” (in the words of the debutante director Gurvinder Singh). In a nutshell, it portrays the problems faced by the Indian farmers and landlords on the outskirts of Punjab.

Having watched this film only after watching a one-minute-long trailer, it did seem very random. One does feel that the film is devoid of any basic premise, hence making it difficult to enliven enough interest for almost 120 minutes. However, it would be advisable for those watching this film to read a bit about the theme and the concept to understand the film better.

Set in a village on the outskirts of Bathinda in Punjab, where people are trying hard to make peace with their existence, the film revolves around a Dalit family. The head of the family, the Father (Mal Singh), is a silent spectator to the various occurrences happening around him. The landlord has apparently sold his plots to an industry that has demolished the house of one of the villagers. Mal Singh’s character joins the community in demand for justice for the trouble family. His son Melu Singh (Samuel John) is a cycle-rickshaw puller who is participating in a strike by his union. The strike turns violent and Melu gets seriously injured. All along, Melu along with his friends are unsure about their existence and their future. They find solace in their drunken conversations during the night when they get to vent out their ‘unheard’ grievances.

Back at the village, the atmosphere is tense, with the police randomly arresting a farmer, gunshots being heard in the night, the apathetic condition of the farmers and their families and just, the solemnity and the eerie silence of the place itself. There’s a recurrent scene in the film featuring a man asking for alms, crying out ‘Anhey Ghorhey Da Daan Do’. The title of the film, just like this appeal, is metaphorical and is left to your interpretation of who the blind horse is. The plot is meandering, but in retrospective, that is the condition of most people living in the rural areas of the country. 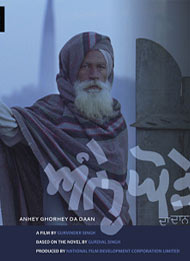 The principal cast of the film (Mal Singh, Samuel John, Serbjeet Kaur who play the daughter Dayalo, Dharminder Kaur who play the Mother and Emmanuel Singh who plays Melu’s brother-in-law) is brilliant. All of them effortlessly portray the pathos that was required of their characters. Mal Singh doesn’t have much dialogue but he leaves a lasting impression only on the strength of the body language. That is no mean feat! Melu Singh is impressive in his short, yet significant role. Emmanuel Singh too, does a fine job.

Being a Punjabi film, one would feel a bit alienated from the characters owing to the language barrier. However, the performances are such that you don’t have to religiously follow the subtitles to understand what the characters are trying to convey. That truly is a remarkable achievement.

The film shines in three departments; cinematography (Satya Rai Nagpaul), music (Catherine Lamb) and the production design (Pankaj Dhimaan). The film could have done with a voice-over or some text about the condition of the farmers and other villagers in Punjab, at the start or the end so that the viewer could relate the sequences to the issue at hand. The cause on which the film is based is a serious one. Hence, if the makers thought that they’d do away with a concrete plot, they could have concentrated more on the issue and enlightened the audiences about the same. Director Gurvinder Singh picks up a brilliant subject. However, the basic plot is a bit of a let-down.

All said and done, the film is very different from other ‘issue-based’ films. There’s a great deal of subtext. The viewer would need to ‘read between the lines’ to really understand the basic essence of the film. (First Posted in MSN)