Mr. Church reunites the Expendables for what should be an easy mission, but when one of their men is killed; their quest for revenge takes them to a mine in erstwhile Soviet Union. 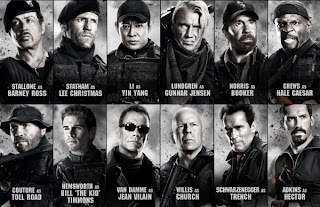 The Expendables, namely, Barney Ross (Sylvester Stallone), Lee Christmas (Jason Statham), Gunner Jensen (Dolph Lundgren), Hale Caesar (Terry Crews) and Toll Road (Randy Couture), along with the new entrant Bill the Kid (Liam Hemsworth) and an able Yin Yang (Jet Li), rescue Trench (Arnold Schwarzenegger) and a Chinese billionaire from a dingy dungeon in Nepal. Bill expresses his desire to leave the crew and settle down with his girlfriend in France. However, on the team’s next mission, they are accompanied by a female mercenary Maggie (Nan Yu), at the behest of Mr. Church (Bruce Willis) to retrieve an item from a plane that was shot down in Albania. Bill loses his life to the antagonist Jean Vilain (Jean-Claude Van Damme). Jean Vilain along with his right-hand man Hector (Scott Adkins) seized the item (a computer containing a blueprint to an abandoned Soviet Union mine which stores five tonnes of plutonium) from the Expendables. To avenge the death of their young team-mate and to prevent the shift in the world order, the team sets out to travel to the mines. 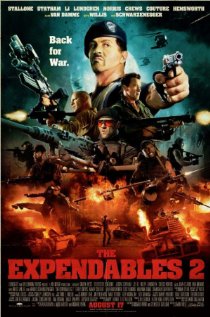 Sylvester Stallone and Jason Statham share amazing chemistry in the film. The action sequences performed by them in tandem, the harmless banter and the occasional tiffs add a lot of lustre to the story. The cameos in 'The Expendables 2' are quite a few in numbers; exceptional scenes involving mega stars such as Jet Li, Arnold Schwarzenegger, Bruce Willis and the incredibly funny super-human Chuck Norris. Liam Hemsworth packs a punch in his small, yet significant role. Jean-Claude Van Damme looks menacing as the antagonist. His final duel with Stallone is action-packed to the hilt. The members of the supporting cast including Dolph Lundgren, Terry Crews and Randy Couture are amazing as the rest of the team. Nan Yu stands out as the lone female mercenary in the film. She plays a prominent role in the storyline and does a great job in the action sequences as well. Scott Adkins too plays an important role as the antagonist and leaves a mark.  Overall, the line-up for this film is absolutely stellar.

The opening 15 minutes of the film display magnificent action, a great background score, marvellous cinematography and to top-it-up, the combined charisma of this all-star cast. Countless gun shots, knife-fights, fist scuffles, bombings and yet, there are a few humane moments in the film. The crisp editing and the relatively short duration (100 minutes) serve the purpose as you don't find a lull moment at all. The film stars in most technical departments. Be it the editing (Todd E. Miller), cinematography (Shelly Johnson) or the music (Brian Tyler) department, the film comes up trumps visually abled with great sound. Director Simon West amalgamates wonderful action with a decent storyline. Turns out, this movie fares better than the first part!

The film is not cinematic brilliance, but the best part is that it doesn’t even pretend to be one. Go watch, have fun! (First Posted in MSN)