Based on the film ‘Total Recall’ (1990) starring Arnold Schwarzenegger, ‘Total Recall’ is yet another adaptation of the 1966 short story ‘We Can Remember It For You Wholesale’ by Philip K. Dick. 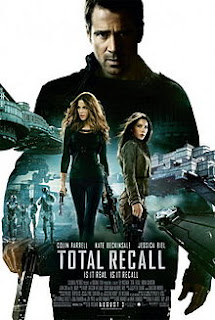 Chemical warfare in the 21st century has left most of the Earth uninhabited. The world is left with two hemispheres which provide living space; The United Federation of Britain and the Colony. Living in the Colony is Doug Quaid (Colin Farrell), a worker at a factory who is suffering from ghastly nightmares.  Discontent with his living condition, he visits Rekall, a company that entrenches in its customers artificial memories of the lives they would aspire to lead. However, McClane (John Cho), an employee at Rekall finds out that Quaid is actually a spy. As he is about interrogate Quaid, an armed SWAT team shoot and kill McClane and the other Rekall employees. Armed with renewed strength and vigour, Quaid manages to kill each of those 10 SWAT members. He returns horrified back to his wife Lori (Kate Beckinsale), who reveals that she’s a secret agent and that they haven’t been married for seven years as Quaid really thinks.  It is revealed that Quaid is in fact, Hauser, a secret agent. Hauser finds out that his best friend Harry (Bokeem Woodbine) is actually a UFB agent and that a woman named Melina (Jessica Biel), who he also sees in his recurring nightmares, is his true love. In the midst of his identity crises he’s pulled into a war between the nations, spurred by the evil Chancellor Vilos Cohaagen (Bryan Cranston). Henceforth, the film is a frame-by-frame copy of the 1990 film. And if you haven’t, you would be better off watching that one than the 2012 version.

Colin Farrell is decent as agent Hauser. He does act better than Schwarzenegger did in the original. However, one cannot replace the intimidating screen presence of Arnie. Arnie’s 1990 version still stands tall, for he not only played the confused factory worker and the vengeful agent Hauser to perfection, but he also brought a lot of life to his character by his charismatic demeanour. Farrell lacks that spunk. Kate Beckinsale, the antagonist Lori, is present throughout the film contrary to the original. She is the menacing, spiteful, gorgeous woman on a mission to kill Hauser. Beckinsale looks and plays her part well. Having already been directed by Len Wiseman (also her husband) in the two Underworld films, the spotlight is clearly on Beckinsale and she delivers. Jessica Biel plays Melina, Hauser’s true love. She looks good and puts in an earnest performances but her character hardly had any depth or prominence through the film. Jessica looks confused through the film and hence, fails to enliven enough interest. 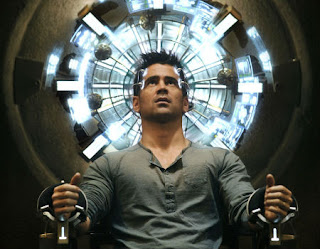 The film does score in the technical department, thanks to technology. The makers give this films a stylized makeover with the massive sets, picturesque setting of a futuristic world et al. The production design by Patrick Tatopoulos and the art direction helmed by Patrick Bannister, give this film an ethereal look. Visually, the film is very appealing. However, as far as the writing goes, the makers should have retained the lighter moments from the previous film. The film features a three-breasted-woman at one instant, hardly invoking any guffaws. The film was too grim with hardly any hilarious or uplifting moments. Even the action sequences got yawn-inducing after a point of time. The half-an-hour long final battle between the sparring teams gets too repetitive with continuous gun-shots and endless leaps.

Over all, the film is average fare. The production design is amazing, with state-of-the-art sets backed with impressive cinematography. However, with patchy plot and performances, the film fails to engage the viewer through its 2-hour-long screenplay.

Like it is said about all remakes, they should be best left alone. Why tamper with something that is already so good? The filmmakers did have an excellent opportunity of using the current technology in the film while retaining the inherent charm of the film. However, the film is quite a let-down. (First Posted in MSN)