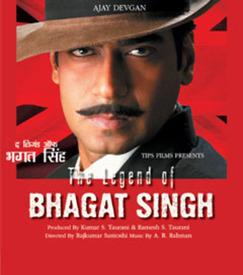 Emphatic performances by the cast, inspiring score by A.R. Rahman, faultless script (thanks to the guidance of Kultar Singh, younger brother of Bhagat Singh who last met him when he was 12), immaculate direction and the encompassing patriotic fervour make this film a must-watch.
Bhagat Singh (Ajay Devgn), as a child, witnessed countless atrocities inflicted on Indians by the British rulers, who had initially visited the country as traders under the guise of the East India Company, but ended up taking over. The Jallianwala Bagh massacre, ordered by General Dyer, which led to the massacre of thousands of innocent men, women and children, had a deep impact on young Bhagat. He lost his faith in Mahatma Gandhi (Surendra Rajan), from whom he was greatly inspired, after he called off the Non-Cooperation Movement following the Chauri-Chaura incident. Bhagat grows up, aspiring to become a revolutionary, starting to pick up fights with the ‘Whites’ or the ‘Goras’.

Brought up in a protected household, Bhagat’s father Kishan Singh (Raj Babbar) and mother Vidyavati K. Singh (Farida Jalal), expect him to settle down in life. They want him to marry Mannewali (Amrita Rao) and handle the family dairy business. However, Bhagat believes that he is already married to the country and that getting freedom is his topmost priority.

So, along with Sukhdev (Sushant Singh) and his other friends, he joins Hindustan Republican Association (a party formed to fight against the British’s tyranny). Along the way, he is joined by Chandrashekhar Azad (Akhilendra Mishra), Lala Lajpat Rai (Sitaram Panchal), Bhaswar Chatterjee (B.K.Dutt) and others to fight against the British and at the same time, compete with the Mahatma Gandhi-Jawahar Lal Nehru (Saurabh Dubey) led Indian National Congress for national prominence.
The story, apart from being the most accurate account of events, has been put on the screen brilliantly. Yes, the plot had its melodramatic moments, but nothing so over-the-top that it got cringe-worthy. Bhagat’s childhood scenes could have been more expressive, but thankfully, the filmmakers decided to do away with anything that would undermine the ‘legendary statuses of the freedom fighters.

The casting couldn’t have been better. Every historical figure (known/unknown) looked their part. The lesser-known freedom fighters such as Bhagwati Charan Vora, Durga Bhabhi, Gaya Prasad, B.K Dutt and the others were immaculately portrayed. Sushant Singh gives an emphatic performance in the film as the passionate Sukhdev. The scenes where he takes on the Britishers are very well written and excellently performed. He does justice to the scenes involving light hearted banter as well as the impassioned speeches. An actor par excellence, truly. Akhilendra Mishra, who plays Chandrashekhar Azad, also completely fits the part. Other freedom fighters such as Mahatma Gandhi (Surendra Rajan), Jawahar Lal Nehru (Saurabh Dubey), Ram Prasad Bismil (Ganesh Yadav) and Subhash Chandra Bose (Kenneth Desai) looked and sounded so much like the revolutionaries that they played. These characters remind you of the freedom fighters, and that’s what serves the purpose.

D. Santosh, who plays Shiviram Hari Rajguru, is a phenomenal actor. Having showed his mettle in the recent ‘Rocket Singh: Salesman of the Year’, the actor has always delivered firepower performances in films such as ‘Khakee’ and this one. The supporting cast, including Farida Jalal, Raj Babbar and Amrita Rao, deliver fine, understated performances. 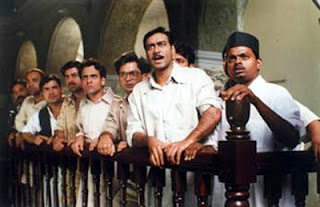 The selection of actors for playing foreigners did leave a lot to be desired. Even the dubbing for the foreign artistes wasn’t neatly done. This is one blip in an otherwise great film.

Lastly, Ajay Devgn, as Bhagat Singh, delivers one of his career-best performances in the film. His character goes through many ups and downs in the film. He had to play, a reticent young man, a shy behind-the-scenes revolutionary, an introspective reader, an impassioned orator, an influencer, an aggressor, a hard-hearted freedom fighter and a martyr in the same film. Ajay’s performance takes you back to the 1920s and the 1930s and makes you feel like you’re a part of the movement.
The film hardly falters anywhere, technically. As already mentioned, the screenwriting has been undertaken brilliantly. A hint of sepia is prominent throughout the film to give it the ‘old-world’ feel and it works well. Brilliant writing by Anjum Rajabali, Piyush Mishra and Ranjit Kapoor, along with able direction by Rajkumar Santoshi not only makes this film historically precise but extremely entertaining as well. The court-room scenes are funny, inspiring and emotional at the same time, which reflect wonderfully on the excellence of the performances. The editing by V.N Mayekar is precise. He does leave the film a little too long at 2 and a half hours but then, that was the norm during the early 2000s. Nitin Chandrakant Desai, the art director, wonderfully recreates the 1920-1930 India. Cinematography (K.V. Anand) too, is finely executed.

The music of the film, composed by A.R.Rahman, is wonderful. Songs such as ‘Pagdi Sambhal Jatta’, ‘Mera Rang De Basanti’, ‘Sarfaroshi Ki Tamanna’ and the absolutely mind-blowing opening credits with ‘Shora So Pahchaniye’, raise the film-viewing experience by quite a few notches.
Rajkumar Santoshi makes a well-intentioned, well-presented film. Extracting wonderful performances, magical music and developing a hard-hitting script, Santoshi excels and how!
This film does not preach, it proclaims. Go Watch! (First Posted in MSN)