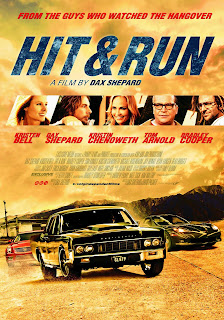 ‘Hit And Run’ is a film about a young man, Yul Perrkins/Charles Bronson running away from his murky past, who is trying to start a new life with his girlfriend Annie Bean. Currently in a witness protection program, there are a few aspects of his past that is girlfriend is unaware of. Enter the horrific criminal, Alex Dmitri!

It’s mildly entertaining in patches. The problem is that these patches are too few and far in between. Predictable plot, lacklustre dialogue and a cringe-worthy Bradley Cooper!

A young couple, Charles Bronson (Dax Shepard) and Annie Bean (Kristen Bell), are leading a hassle-free life. Charles, a former abettor in bank robberies, is in a Witness Protection program and Annie teaches at a college. Charles is assigned a clumsy United States Marshal, Randy Anderson (Tom Arnold), for protection. Things are going fine until Annie has to give a job interview for the post of heading a department at a college in Los Angeles. She has to relocate and Charles, who has been hiding the truth from her all along about his real identity, faces a dilemma. After much deliberation, he agrees to drive his girlfriend to LA. Problems arise when Annie’s suspecting ex-boyfriend Gil Rathbinn (Michael Rosenbaum) is anguished at the prospect of losing his former lady love and gets Charles’ old accomplice Alex Dmitri (Bradley Cooper) to know about his whereabouts. What follow is a sequence of car chases, gunshots, kidnappings, confrontations, accidents and eventually, justice is meted out to everyone concerned. The plot, albeit good, wasn’t done justice to from the writers and the actors. 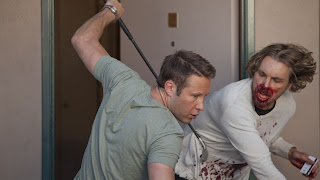 Kristen Bell was just about passable in the film. Else, Dax Shepard, Michael Rosenbaum, Bradley Cooper and the rest of the supporting cast, just amble away on the screen without much purpose. Some of the dialogues are bizarre and totally out-of-place. Even the chemistry between the lead couple (also dating in real life) is bland.

The car-chases have been shot excellently. There are a couple of slow-motion shots which look brilliant on the big screen. The score is amusing, to say the least. There’s a scene in which a police vehicle catches the Marshal Gil’s car for speeding and you have a song playing in the background (sounding like a typical 80s Bollywood number). And, you’re left flabbergasted. Director David Palmer and Dax Shepard (now you know!), deliver bad writing and extract poor performances from the cast.

Would you want to watch Bradley Cooper, with golden braided hair, hamming away to badly-written dialogue? No! (First Posted in MSN)