Incumbent Congressman Cam Brady is set to win yet another term at the office unopposed. Till, two businessmen, the Motch brothers, seize the opportunity to place their man, Marty Huggins, against Brady. The battle begins over who will conquer the North Carolina district. 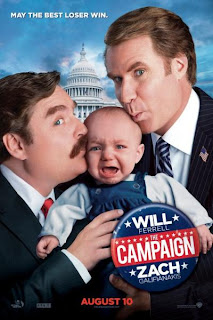 Exceptional dialogue, amazing performances and great concept! This is not just a raunchy comedy, nor is it merely a political drama. It’s a mix of both!

Cam Brady (Will Ferrell) is the unopposed candidate for the 2012 elections in North Carolina district. Posing as a typical politician, Cam is shown to be a womanizer, a high-handed leader, a maverick, and just an arrogant go-getter. He beds cheerleaders, women supporters, competitors’ wives, and is silly enough to let it out in the public as well. He also tends to give the same speeches everywhere, no matter what the context is or who the addressees are. Despite all this, Cam is a favourite with the voters.

The Motch Brothers, Glenn Motch (John Lithgow) and Wade Motch (Dan Aykroyd), have a plan of setting up a huge plot in one of the districts of North Carolina, where the employees will not be Americans, but Chinese. This will be done so that the Motch brothers don’t have to spend a penny on the shipping costs and products can be made within the American territory. However, this method of ‘insourcing’, as the Motch brothers call it, is nothing but injustice being meted out to the Americans. They ask one of their influential friends, Raymond Huggins (Brian Cox), to convince his naïve son Marty Huggins (Zach Galifianakis) to stand up against Cam Brady during the elections.

Now, Marty is a bit on the clumsier side. He is not well groomed, neither is he well-spoken. He and his family, along with wife Mitzi Huggins (Sarah Baker) and kids, spend time indulging in food fights, playing childish games, not taking themselves too seriously, hence, leading a hassle-free life.
It would have been quite a big ask to get the extremely gullible Marty to stand up to the ‘strong-haired, handsome, well-groomed and charming’ Cam Brady. So, the Motch brothers hire the super-smart Tim Wattley (Dylan McDermott) to become Marty’s campaign manager. So, the Huggins family undergoes a big makeover to ‘fit’ into the political circle. There’s mud-slinging, sleeping around, ugly altercations and a lot of political skirmish among the two rivals to decide who the winner is. The concept is terrific, backed with wonderful performances. 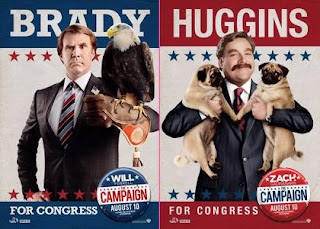 The performances are amazing. Will Ferrell and Zach Galifianakis, in particular, are mind-blowing. Even though they play rivals in the film, the chemistry in their skirmishes, lights up the screen. Will Ferrell is the arrogant politician, who refuses to bow down to the clumsy nobody, played by Zach. One sleeps with the other’s wife. The other gets the former’s son to call him ‘Dad’. Hilarious gags all around, justified by brilliant acting. Even the supporting cast, comprising John Lithgow, Dan Aykroyd, Brian Cox, Sarah Baker and Dylan McDermott, is absolutely amazing in their respective roles.

The casting is perfect, but the writing is even better. The scenes couldn’t have played out better than they did, thanks to brilliant writing by Shawn Harwell and Chris Henchy. Some of the one-liners, anecdotes and jokes do leave you a bit dumbfounded, but you end up guffawing anyway. Often, the jokes border on the ridiculous, but the effortlessness of the cast is what pulls off the punches. You don’t need too much effort in comedy when you have Zach Galifianakis of ‘The Hangover’ fame. Director Jay Roach, who has directed films such as ‘Meet The Fockers’, ‘Meet The Parents’ and ‘Dinner For Schmucks’, gives yet another laugh-riot!

Zach Galifianakis and Will Ferell, are phenomenal. 'R' rated, but funny nevertheless. (First Posted in MSN)