Yash Chopra’s second directorial venture ‘Dharmputra’, made in the year 1961, was a poignant tale about Hindu-Muslim unity. Based on a novel of the same name by Acharya Chatursen, ‘Dharmputra’ was the first Hindi film to depict the partition of India, along with Hindu fundamentalism.

Although the screenplay is cramped with unnecessary songs, the film does make for a compelling watch. In spite of being shot in 1960s where technology was a bit of a handicap, the film does make for a fine viewing. Yash Chopra, who will be remembered as the ‘King of Romance’, shows his other side as a filmmaker with his second film. Shashi Kapoor announced his arrival with an impactful performance in this film. 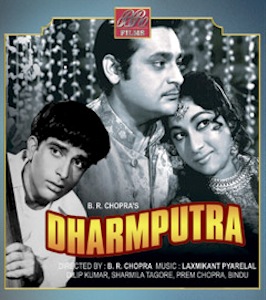 The film opens in the year 1925, during the British rule in India, when the country was at the height of its independence movement. Two families, residing in Delhi, that of Nawab Badruddin (Ashok Kumar) and Gulshan Rai are so close to each other that they virtually share the same house.

Nawab’s daughter, Husn Bano (Mala Sinha), has an affair with a young man named Javed and gets pregnant. When the Nawab attempts to arrange her marriage with Javed, the man disappears.

Gulshan Rai’s son, Dr. Amrit Rai (Manmohan Krishna), and Amrit’s wife Savitri (Nirupa Roy) assist Husn with the birth of a baby boy, Dilip, and even adopt him to give him their family name. During childhood, he is the cynosure of all eyes at both the households. Husn finally gets married to another man and moves out of the joint household. While she gets pregnant again, the baby gets killed in the womb owing to an accident. Nawab, meanwhile, loses his life while holding a protest against the British.

Years later, Husn Bano and her husband return to the Rai household only to find that Dilip has become a Hindu fascist and a Muslim-hater. Not knowing his own roots, will Dilip ever get to know that he was born to a Muslim mother? Will Dilip and his mother Husn Bano ever reunite? How will Dilip react to the news considering that he has grown to hate Muslims so much over the years? The film ‘Dharmputra’ tackles a sensitive issue very well.

The story, albeit about Hindu-Muslim relations, is also about the coming-of-age of Dilip. The film also revolves around Husn Bano, the biological mother of Dilip, who loves him so much that she does not have a problem with his extreme ideology. All in all, it’s a very well made film which conveys the right message about secularism.

Shashi Kapoor announces his grand arrival. This film brought out the revolutionary within the actor. He is terrific in the role and one wishes that he had done more hard-hitting roles during his time apart from doing the romantic films, which came to be known as his forte.

The music of the film is hummable, not extraordinary. One reason could be that there are too many songs filled in the screenplay. One problem with the story was that, owing to the unnecessary songs, the basic premise takes too long to get settled. Shashi Kapoor arrives too late in the film.

Even the cameo by Rajendra Kumar, albeit wonderful, seems unwanted if you put the entire film in context. The dialogues by Akhtar-Ul-Iman are, needless to say, fantastic. The film puts forward a great message. At the time of its release, it must have had a very strong emotional connect with the audience. In any case, it still does.

Yash Chopra wasn’t just the King of Romance. He was simply THE KING! Good at directing any genre.