With a title as unimaginative as ‘It’s Rocking – Dard-E-Disco’, the film never sets any expectations to begin with. Veteran music composer Bappi Lahiri decides it’s high time he gets his acting boots on. 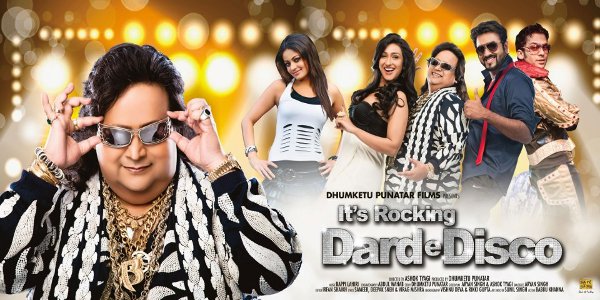 Bollywood has-beens, Akshay Kapoor, Aryeman Ramsay, Sneha Ullal and Rituparna Sengupta, leave no stone unturned to exhibit their lack of talent. You have all the character artistes from the 90s films, including Razzak Khan, Shakti Kapoor, Sharat Saxena, Upasana Singh and Dinesh Hingoo, in this gem of a movie. They are, needless to say, deplorable. The story is inconspicuous by its absence.

Rocky and Rambo (one of them played by Akshay Kapoor and the other by Aryeman Ramsay) are two brothers, who have no real goal in life (much like the makers of ‘It’s Rocking – Dard-E-Disco’). Both are under this misconception that they are immensely attractive men. They dress us in retro attire and try to gate crash discotheques around the city. Their father, played by Sharat Saxena, is worried about his good-for-nothing sons while the mother, played by Upasana, pampers them limitlessly. Akshay and Aryeman were never great actors. The fact that they agreed to do this film doesn’t speak volumes about their ability to choose either. So, the two brothers try to enter Disco King’s (Bappi Lahiri) discotheque, but are turned down by the burly bodyguard who proclaims “Only Invitees Are Invited”. They finally get enter the disco when Bappi Da’s car smashes into their van. This gives them an opportunity to bond with Disco King.

There’s a villain Powder King, played by Shakti Kapoor. He wants to sell drugs inside Disco King’s discotheques. However, DK (as he is fondly called) is staunchly against drugs and will not allow them to be distributed in his premises. So, a plan is made to kidnap DK. There are two heroines in the film, RJ Mili, played by Sneha Ullal, and Ganga, played by Rituparna. Both of them have 5-10 dialogues each, one dance number and in the climax, a few fight sequences. Needless to say, they are terrible in all the above.

The film loses out on all fronts – Acting, music, story, dialogues, costume design (watch the trailer, you’ll know), choreography, art direction, the works! Director Ashok Tyagi must have had something else in mind, hopefully. Wonder who can conceive such an inexplicable film. The saving grace was that Bappi Lahiri got to belt out few of his chartbusters from the 80s.