America’s greatest bank robber Will Montgomery returns from prison after serving an 8-year-sentence, only to learn that his daughter has been kidnapped by a former accomplice.

The premise has been borrowed from multiple films. The action sequences have been poorly executed and the acting isn’t noteworthy either. The film is bereft of logic. Most such films are, but then ‘Stolen’ really excels in the ‘monotonous’ department. Nicolas Cage just doesn’t cut it as an action hero. 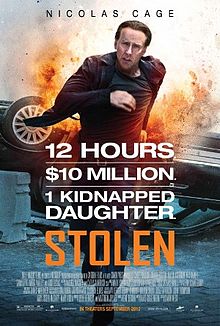 Will Montgomery (Nicolas Cage), along with his team, carries out a bank robbery of $10 million. It goes kaput as a heated moment between Will and partner Vincent (Josh Lucas) leads to the former getting caught by the FBI. Although Will had the money while he was being chased by the police, it isn’t found on him when he gets caught. Much later, we learn that Will, in a sudden change of consciousness, burns all the money and surrenders!

However, he doesn’t reveal anything to the law enforcement. After serving 8 years in prison, Will returns a much reformed man, holding no bitterness at all towards his accomplices, who bailed on him during the robbery. Yet, the feeling isn’t quite mutual. Over the years, Vincent lost a leg (having been accidently shot by Will during the chaos of the bank robbery), changed his identity and the grudge towards Will turned into hatred. Vincent believed that Will had hidden the $10 million dollars somewhere before he surrendered. Thus, he was eager to get his share of the bounty. Even the FBI suspects Will of having hidden the money somewhere and surrendered himself, so as to escape a long sentence.

So, Vincent kidnaps Will’s daughter, Alison (Sami Gayle), and asks for a $10 million ransom. The film revolves around Will and his struggle to stay off the clutches of the FBI, get his daughter back and notch up the ransom money. 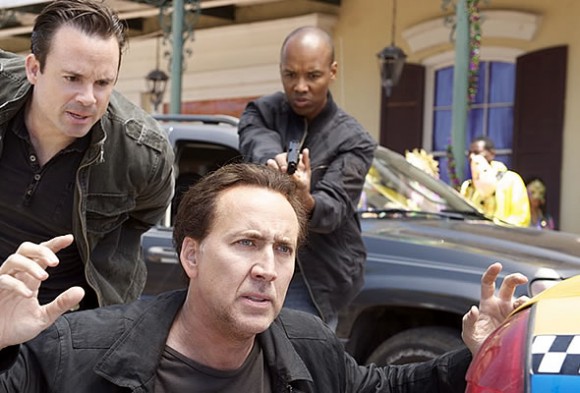 At the conceptual level, the film is like any other action film that you may have seen before. The ‘daughter-getting-kidnapped’ has been attempted so many times before and with better results. Besides, Cage is no Liam Neeson!

Some sequences in the film reek of false bravado. There’s a scene in which Will’s daughter is in the trunk of a car. Vincent pours fuel around the car and sets it on fire. So, you have virtually the entire car on fire with the daughter in the trunk. Will not only manages to finish a fistfight with Vincent but also gets into the car, and drives into the nearby river. The trunk gets opened another 10 minutes later. The daughter doesn’t get a scratch.

Many more instances, one in which Will melts gold from a level below the bank locker to get the required ransom. Award-winning-stuff!

There isn’t a problem with illogical scenes or even plot holes but the major drawback with the film was that the dialogues and characters haven’t been well written. And to top it all, even the performances are quite lacklustre.

Nothing really works for ‘Stolen’; the dialogues sans the wit, the robbery scenes sans the thrill and the performances sans the edge. Director Simon West (‘Expendables 2’) doesn’t make the cut with this film.

Even though the film is barely 100-minutes-long, the story gets way too monotonous. They try to rev up the climax a bit by adding a funny sequence, but you’ve already lost all interest by then.