‘Life Of Pi’ is based on the novel written by Yann Martel. The film revolves around a young Indian boy Pi’s experience of being stranded on a lifeboat with a ferocious Bengal tiger in the middle of the Pacific Ocean, for months. 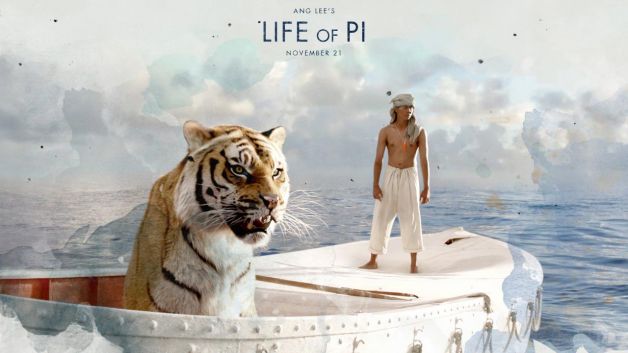 The film is an absolute must-watch, just for the visuals. The film is studded with gorgeous visuals, from the opening credits right up till the climactic sequence. Director Ang Lee, along with his team, should be lauded for having the vision to conceive, and execute, such mind-blowing sequences. Performances, most notably Suraj Sharma, Irrfan Khan, Adil Hussain, Ayush Tandon and Tabu, are stupendous. The climax is a let-down. The film should have gotten over 20 minutes before it eventually did. The director chooses to stick to the author’s version of the ending, which was the weakest point in the book. As an adaptation, the film is very good. In isolation, it’s a good film. The ‘by-the-end-of-the-story-you-will-believe-in-God’ peg doesn’t make the cut. Anyhow, the film is definitely worth a watch for the actors, Ang Lee, the visuals and the Royal Bengal tiger!

The film starts with the older Pi (Irrfan Khan) narrating instances from his childhood to a writer (Rafe Spall). The writer is looking for a story for his new novel. The writer is told by Pi’s French uncle (Gérard Depardieu) that Pi’s story will make him believe in God. So, here they are. The two discuss Pi’s childhood at length. Revelations about the secret behind Pi’s name (which is a shortened version of the French name Piscine Molitor Patel‎), his discovery of Hinduism, Islam and Christianity, his first encounter with the 450-pound Royal Bengal tiger, unusually named Richard Parker, his first brush with love and much more. Pi then moves on to narrate the actual life-changing story to the writer. Pi’s family, comprising his father (Adil Hussain), mother (Tabu), brother (Vibish Sivakumar) and him, run a zoo at Pondicherry. Post the emergency during the 1970s, Pi’s father decides to move with the family to Canada, where he can hope for a better future. While the land at the zoo never belonged to the Patel family, the animals did. So, the family set aboard on a ship to Canada, and accompanying them are zebras, orang-utans, hyenas, the horrific Richard Parker among others. In the middle of the Pacific Ocean, the ship sinks owing to a storm taking down with it Pi’s family and most of the animals. Pi survives by the scruff of his neck. He hangs on to a lifeboat in the middle of this turbulent weather. His expert swimming skills, which were taught to him by his French uncle, do come in handy over here! 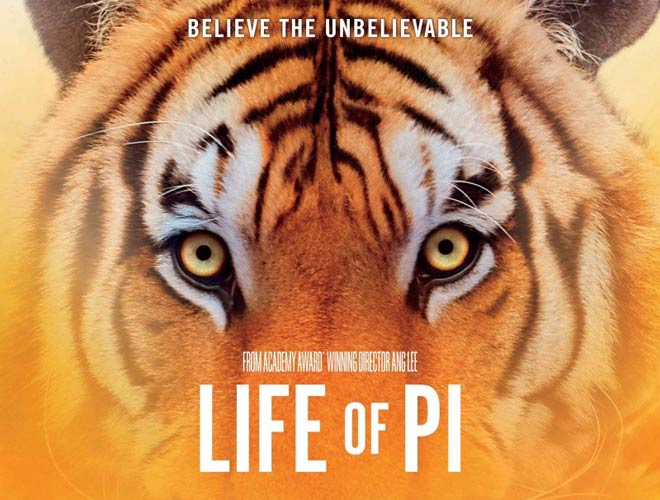 By the next morning, Pi wakes up to find a zebra, an orang-utan, a hyena and with them Richard Parker on the boat. The tiger ends up killing all the three animals, leaving Pi stranded all alone to fend for himself. The rest of the film is about how Pi fights all odds to survive in the middle of the enormous ocean with a lone raft and a lifeboat with a tiger. The film is as much about Pi’s self-discovery and his bonding with the tiger as it is about the triumph of human spirit! While the story, in itself, doesn’t take your breath away, the stunning visuals most definitely do. All the discrepancies in the plot are subsided by the sheer gorgeousness of the film.

Yes, the film doesn’t overwhelm you as much as you’d have liked. In the sense that you don’t really get that uplifting feeling in the end as you would while watching any other ‘triumph-of-human-spirit’ film. The climactic scenes just don’t gel with the rest of the film which is a pity, considering the first hour-and-a-half of the film is so superb!

Performances are pretty much the life of the film. The cast, filled with Indian actors, delivers astoundingly well. Irrfan Khan, although a bit wayward with the accent, just blows your mind with his godly acting skills. Tabu’s short but significant role makes you feel that the Hindi film industry just doesn’t deserve this gem of a performer. Ayush Tandon, who plays Pi’s younger version, too is an absolute delight to watch on screen. Adil Hussain is bang-on, yet again. He gets just about everything right, be it the limp, the Gujarati accent, the Tamil diction, the angst-ridden family man portrayal. Even though his role is quite short, in terms of length, the character stays with you long after you’ve watched the film. Suraj Sharma is a genius. He manages to get everything right, be it the dialogue, expressions, body language, mannerisms! It’s his debut on-screen appearance but it just doesn’t show. Suraj’s performance is truly applause-worthy (and hopefully awards-worthy as well!).

Ang Lee’s vision is beyond the realms of anyone’s imagination. Some of the scenes in the film, for instance, the opening credits, the Krishna-Yashoda solar system sequence, the island sequence towards the end and all the ocean sequences, are simply mind-blowing. David Magee does a decent job of the screenplay.

Mychael Danna’s score is one of the best among Hollywood films that have released this year. The composer has also worked on ‘Monsoon Wedding’, ‘Water’ among other India-based films, so the connection with our music worked very well. The score can be listened to on loop, for hours at end. In the film, it tailors in seamlessly. One major problem with this film is that the director hasn’t rectified what went wrong in the novel. The scenes involving Pi and the tiger are magnificent looking and equally gripping.

However, they do overstay their welcome. The length of the film, in addition to the less-than-gratifying climax, does let this film down a bit.

‘Life Of Pi’ is a wonderful story about the triumph of human spirit. The ending was quite ordinary. Go for the film anyway. It's not a masterpiece, but it is pretty close.